Anglican Archives of the Diocese of Cariboo 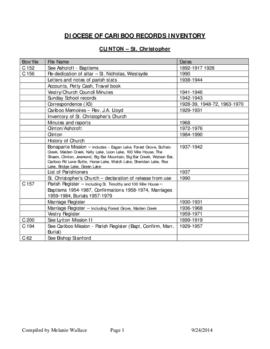 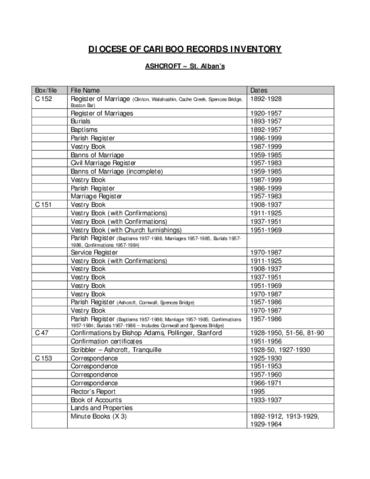 Anglican Archives of the Diocese of Cariboo

St. Alban's Church opened in 1891. Ashcroft was established as a separate parish by 1892, having previously been a part of the Kamloops Missionary District. Initially the parish included Nicola, Clinton and Revelstoke in its ministry. Around 1896 Revelstoke was made into a separate charge. The parish has embraced various other communities in its ministry through the years. By 1950 the parishes of Ashcroft and Clinton, with associated points, had been joined together. By 1963 they were again separate, although until ca. 1975, when Clinton was transferred to 100 Mile House Mission, they were mostly served by one priest. During the 1970's St. Alban's, Ashcroft also became responsible for the new congregation at Logan Lake and for St. John at the Latin Gate Church, Cornwall and the Toketi congregation which were previously under the Shulus Indian Mission. By 1987 Logan Lake had become a separate ministry while St. Christopher, Clinton had been placed again under Ashcroft. The parish currently includes Cornwall, Toketi and Clinton.