Anglican Archives of the Diocese of New Westminster 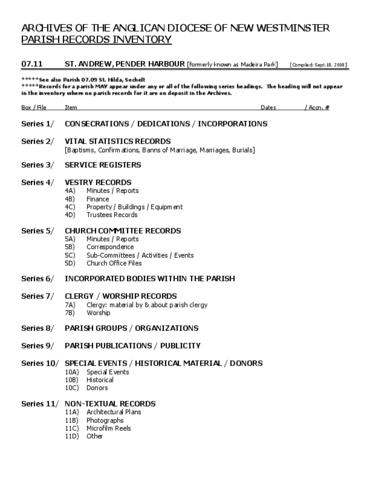 Anglican Archives of the Diocese of New Westminster

The congregations in the parish of Sechelt were originally served by the Columbia Coast Mission and the Skookum Chuck Mission at Egmont. In 1928 the southern section of the Skookum Chuck Mission was separated and worked from St. Bartholomew's, Gibsons. Within this parish, churches were opened at Sechelt (St. Hilda's) and Roberts Creek (St. Aidan's) during the 1930's. St. Hilda's, Sechelt was separated from Gibsons and Roberts Creek in 1964. At the same time, St. Mary's, Garden Bay at Pender Harbour (opened as a Columbia Coast Mission hospital chapel in 1939) and the Church of His Presence, Redroofs at Halfmoon Bay (opened in 1962) were attached to the new parish. These two churches closed in the early 1970's. New work was begun in Madeira Park at Pender Harbour and in 1979 a new church, named St. Andrew's, was dedicated. St. Andrew's was separated from St. Hilda's, Sechelt in 1992.